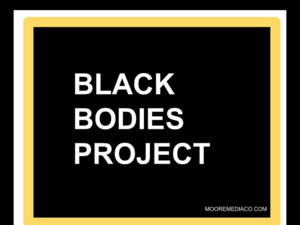 The Black Bodies Project is a Moore Media production which takes candid, thoughtful, courageous exploration into what it means to be black in America and in the world. The project consists of a film, a book, and an interview series.

The film hears from 16 black people from Austin of different ages, backgrounds, religions, nationalities, and skin tones to learn from them what it means to exist in their specific black bodies.