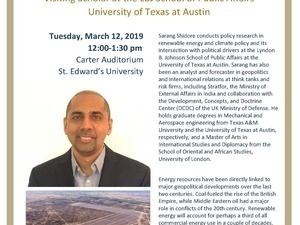 Geopolitics of the Energy Transition

Sarang Shidore conducts policy research in renewable energy and climate policy and its intersection with political drivers at the Lyndon B. Johnson School of Public Affairs at the University of Texas at Austin. Sarang has also been an analyst and forecaster in geopolitics and international relations at think tanks and risk firms, including Stratfor, the Ministry of External Affairs in India and collaboration with the Development, Concepts, and Doctrine Center (DCDC) of the UK Ministry of Defense. He holds graduate degrees in Mechanical and Aerospace engineering from Texas A&M University and the University of Texas at Austin, respectively, and a Master of Arts in International Studies and Diplomacy from the School of Oriental and African Studies, University of London.

Energy resources have been directly linked to major geopolitical developments over the last two centuries. Coal fueled the rise of the British Empire, while Middle Eastern oil had a major role in conflicts of the 20th century. Renewable energy will account for perhaps a third of all commercial energy use in a couple of decades. Join us for an expert discussion on the potential geopolitical consequences of the coming age of renewable energy including discussion of implications for addressing global climate challenges.

This event content is powered by the Localist Community Event Platform.