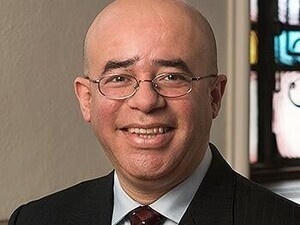 The Most Rev. John McCarthy Lecture Series: "Latinos and the Re-Creation of American Catholicism in the Twenty-First Century"

Professor Ospino’s lecture will start with a reference to the earlier days of Catholicism in the American continent with a particular connection to the apparitions of Our Lady of Guadalupe. He will build upon the concept of a "new creation" as suggested by aspects of the Guadalupe image. He will bring the audience into the twenty-first century and highlight how Latinos, given the numbers, are redefining U.S. Catholicism or have the potential of "re-creating" the American Catholic experience for a new generation. The lecture will provide a critique and affirmation of elements associated with the Americanization process of Catholicism, thus concluding with a set of commitments into the future, inviting those in the audience to imagine the type of Catholicism we want to see in the near future.

The series honors the Most Reverend John McCarthy, who led the Diocese of Austin from 1985 to 2001, and underscores the university’s commitment to its Catholic roots and Holy Cross heritage. Held on campus through the School of Arts and Humanities, the McCarthy Lecture Series brings Catholic religious and lay experts from around the country to discuss issues facing the Catholic Church in the 21st century. The lectures are free and open to the public.

Click here to register as an attendee on Zoom.

In peron seating is limited, email jtamayo1@stedwards.edu if you would like to attend the event in Jones Auditorium.